As the game came to a close, final stats showed that 543 people from 53 countries participated in the game, generating 9,958 ideas about R&D and innovation for the year 2038. Here are some general themes that captivated our imagination.

No matter your take on today’s social media and online anonymity trends, many participants in the Innovate2038 game felt that our future would hold new ways to link up and connect: neural networks, specially monetized social networks, social networks for robots and AI, isolated R&D units disconnected from the global networks, a handover of all surveillance data to R&D firms for research purposes, and so on. The ideas were many and varied, and rarely failed to spark a lively conversation. Here is just a small sample:

About halfway through gameplay, a term arose that would later become a top-trending term and category of discussion: freetizen.

As explained, a freetizen is an individual temporarily traveling to other countries participating in the freetizen program through a special passport program. One participant helped lead the charge through story-telling:

With mention throughout the game of tribalism, regionalism, and nationalism blocking innovation as in-groups turn hypercompetitive, some game participants felt that the freetizen model may help turn the tide. By developing a category of global citizen capable of traveling freely and conducting unhindered research wherever he or she may go, a movement may form to help counter the factionalism that concerns so many. Of course such a system would not be without its detractors… 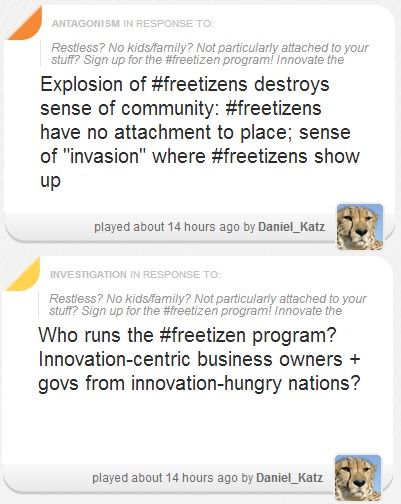 Of course we are not without those who believe we can and should be better than we are. Any discussion of the future of R&D and science will always generate ideas around human improvement, better educational systems, and general optimism about breaking down barriers and borders that divide us. The freetizen concept was one such element of dissolving boundaries, but many more game participants saw humans as capable of being more: 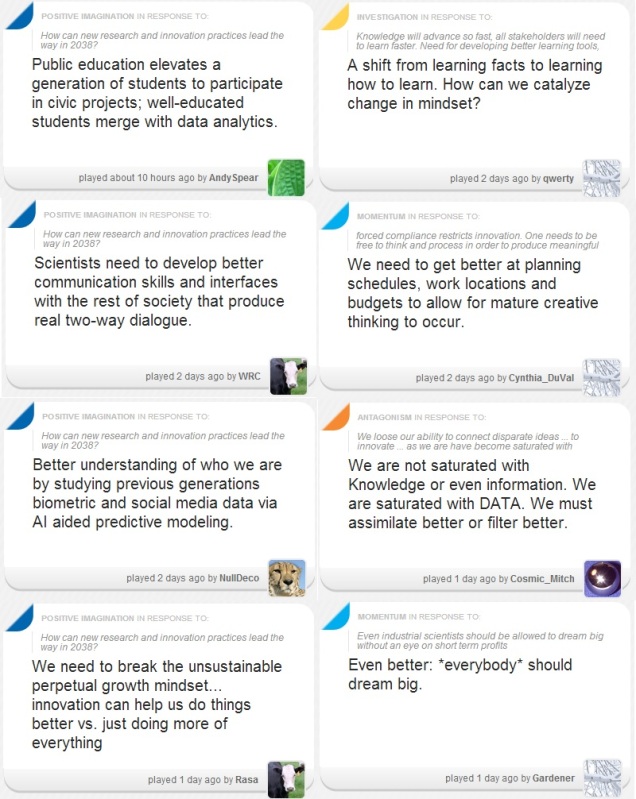 Crowd-sourcing ideas about the future is an excellent way to see the genius resident in our society. The above “cards” are a mere sampling of the information and insight gathered during Innovate2038 gameplay. More detailed insights can be obtained by visiting IFTF’s Innovate2038 blog. But this game was also not just about having fun envisioning the future, it was designed to aid our ability to forecast plausible future scenarios constructed by an IRI project team.

All of the information gathered during this 36-hour brainstorming session is assisting one of IRI’s 75th anniversary programs: the IRI2038 Futures Project. Want to learn how the above insights, and the other 9,900+ ideas generated by the game’s participants, have helped us develop a better picture of the future? Register to attend our Future Summit on November 18-20 in San Jose, California. The project leadership will be presenting their final summary alongside four plausible future scenarios developed over the project’s lifespan. What better way to end the year than by finding out how top minds in R&D see our world changing over the next 25 years?